As the preferred power solution for Blackmagic, we pride ourselves on making affordable, durable and unique solutions for all of their cameras. 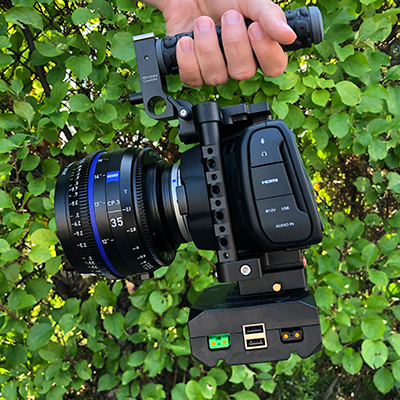 Just like the Pocket 4K Camera, the Powerbase EDGE battery pack was released at NAB 2018 and is the go-to power solution for long runtimes with the Pocket 4K and Pocket 6K. The PBE-BMPC4 model will keep your Pocket setup compact by mounting right to the bottom of your camera with a ¼-20 screw, and it also has multiple accessory outputs (2 P-taps and 2 USB’s) providing the chance to power an on-camera light, monitor, or whatever else you may need to power right from the battery pack (or even just charge your phone). The battery is also equipped with a backlit runtime LCD to give you remaining power runtime down to the minute. As an extra bonus in case you want to use the camera on a rig with a V-Mount plate or even power a URSA Mini Pro with it as well, the Powerbase EDGE has a V-Mount option – What a versatile battery! If you’re curious about runtimes, the EDGE will power the Pocket 4K for about 4 hours and 10 mins, and it will power the Pocket 6K for about 3 hours and 50 minutes. Keep in mind though that runtimes can vary depending on certain variables such as frame rate and the use of additional accessories.

If you have the latest Pocket camera, the Pocket 6K Pro, the Powerbase Edge model to go with is the PBE-BMPC6KP which comes with a NPF style adapter cable since this model doesn’t accept the LP-E6 style battery like the previous two models.

In case you don’t want to use the dummy battery cable, we do also offer a powertap to the 2-pin DC-in which works on all of the models (Pocket 4K, 6K, and 6K Pro). This cable is the PTC-BMPC4, and while using this, you are also able to keep the internal battery in the camera which provides an opportunity to hotswap the Powerbase Edge battery without losing power.

Now if do you happen to also have an URSA Mini Pro as briefly mentioned above, there are many other battery offerings for it as well. Before we discuss more batteries though, let’s mention the appropriate plates you will need for the various URSA Mini Pro models. The GP-S-URSA (v-mount) and GP-A-URSA (3-stud) mount appropriately to the camera, and the choice in mount style is a matter of preference if you are starting new. The choice is simple should you already have either mount battery packs in your arsenal. Each mount plate is outfitted with 2 P-taps and the specific BMD URSA 12way Molex connector needed to power the camera as well as screw hardware for proper attachment. Now, onto the batteries!

The Hypercore NEO series of battery packs employ the very latest in lithium ion technology, and are constructed with the specific purpose of handling and sustaining high power draws. They entail many great features; 2000 charge/discharge cycle rating, Runtime LCD, built in accelerometer/sleep mode function, to name a few. 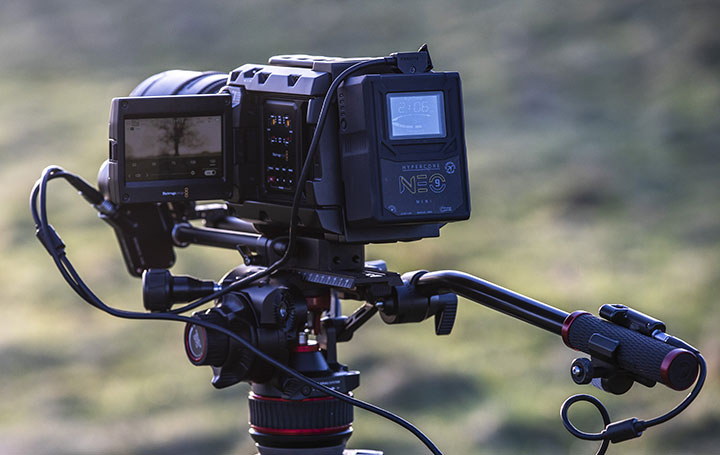 All of our battery packs are the most charge compatible in the industry as well, so if you have pre-existing charging stations, there is a good chance you only need to invest in the battery packs for the camera, furthering your ROI on your charger.

Even more advanced from the Hypercore NEO series is our Helix series. This line encompasses all of the same capacity offerings (98wh, 150wh, 190wh, 293wh) and features of Hypercore (besides a USB port), but has an updated intuitive runtime LCD, dual voltage, and RFID as additional features. The packs can function as standard voltage battery packs allowing them to seamlessly integrate into your current battery fleet, but when paired with a Helix mount plate, a user can access the high voltage to simultaneously output 14v/28v. High voltage isn’t required for any Blackmagic Design cameras, but it’s a good function if you happen to have a high voltage LED panel, or if you would like to future proof yourself should you invest in high voltage equipment in the future.

If you have a BMCC, these Hypercore and Helix battery options will work with this camera as well. All you will need is a different battery mount plate. The appropriate plates customized for the Black Magic 2.5k/4k are GP-S-BMCC (V-mount) and GP-A-BMCC (3-stud). Each plate has a 20” cable to plug into the DC input on the camera and offers two additional P-taps, to power other production accessories.

Another battery option for the BMCC is the Powerbase Edge’s successful predecessor, the PowerBase 70. Our PB70-BMCC has undoubtedly been the most popular power option for this camera, and we know why. The 77wh lithium-ion battery pack will quadruple the run-time of your BMCC 2K or 4K (we have heard from users that it has lasted more than 6 hours in some instances!) The PB70-BMCC can also double as a grip at the bottom on the camera. In addition (just like the Powerbase Edge), the battery component of the PB70-BMCC can be used as a standard V-mount battery as well.

If you have any further questions on how to power your Blackmagic cameras, please don’t hesitate to contact us.