Sony, as we all know, is a widely diversified corporation selling products from consumer electronics, to their array of professional cameras. Of course they offer many of their own power solutions along with those, but we’re here to offer unique options that may solve your everyday production needs. 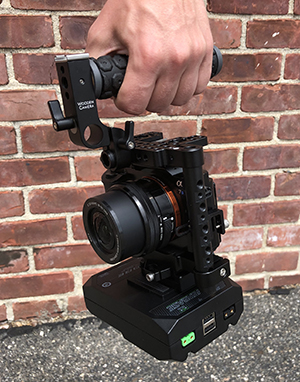 Let’s start first with the Sony a7 and a9 series of cameras. The Powerbase Edge is a 49Wh lithium ion battery that is the most versatile pack on the market. It will either mount to the bottom of the camera using a ¼-20 screw mount, or if you have it set up as a rig, it can mount using the V-Mount on the other side of the pack. The battery is feature packed with two P-taps and two USB ports for additional accessories such a monitor or to even charge your cell phone. In addition, it has a multipurpose runtime LCD to provide remaining runtime in hours and minutes when connected to the camera and a charge indicator when connected to a charger. The appropriate Edge sku for the a7 cameras using FW50 batteries is the PBE-A7, and the sku for the a7 cameras using the FZ100 style battery is the PBE-A7FZ.

For Sony cameras accepting the L-Series batteries such as the HXR-NX100 or PXW-Z150, there is a Powerbase Edge model, PBE-S.
All of Powerbase Edge models mentioned here will come with the 6” adapter cable and PB70-C15 charger. If you need additional cable length there is an extension cable (PBEC-EXT) offered which provides an extra 18 inches. 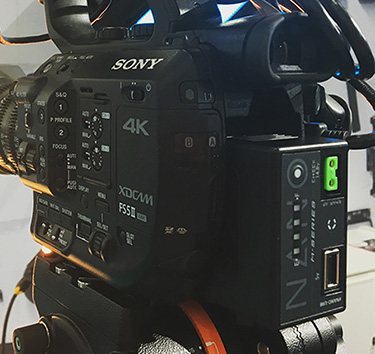 Up next for the professional Sony cameras are the Sony FS5, Sony FS7, Sony FX6 and FX9. Luckily for you (and us), we offer the most unique BP style option out there, the NANO-U98. This 98Wh lithium ion pack equipped with a LED power gauge, 1 USB, and 1 p-tap, making it capable of powering additional accessories such as an on-camera light. The batteries will charge on Sony OEM chargers, allowing you to extend the service life on your already existent chargers.

If you’d rather use more of a brick style battery option for your FS7, FX6 or FX9, we have v-mount and 3-stud mount options as well as the appropriate mount plates. The plates for the FS7 are the GP-S-FS7 (v-mount) and GP-A-FS7 (3-stud mount). They mount directly to the back of the FS7 as alternative option to the XDCA-FS7. Our plates do not have any video related processing capabilities as the XDCA, just adapting the camera to V-mount. They have a 4-pin XLR input option and two p-taps. If you prefer an even more advanced mounting option, we have our compact Jetpack series offering all the power outputs you’ll need. In addition to having the same power options offered on the plates, the JP-V-FS7 (v-mount) and JP-A-FS7 (3-stud mount) also includes one USB, one 5v Lemo output, and two 12v regulated Hirose 4-pin outputs. Again, no video related processing, just a power option. 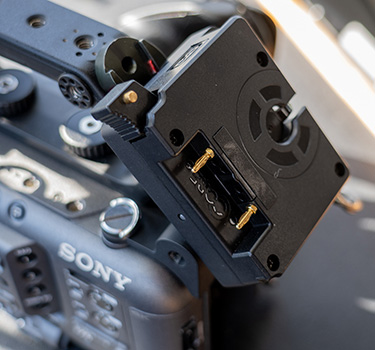 The appropriate mount plates for the Sony FX6 are the CXVM-FX6 (v-mount) and CXAM-FX6 (3-stud mount). The milled aluminum product attaches into the top of the camera (with included screw hardware) to provide a secure platform for mounting brick batteries directly onto the FX6. It has a 19.5v DC output with a visual low battery warning LED and a DC barrel input (OEM camera power supply) for hotswapping between external and on-board power. Another option for hotswapping is the ability to put up to a BP-U100 battery pack inside the battery cavity on the camera, allowing the user to hotswap batteries. Once the v-mount on-board pack dies, it will automatically pull power from the BP-U battery and you will see the battery indication on the viewfinder change. The plates are also equipped with a powertap and USB to power additional accessories.

To end out the mount plate category, the plates for the FX9 are the CXV-FX9 (v-mount) and CXA-FX9 (3-stud mount). Similar to the FX6 plates, the milled aluminum product also attaches into the top of the camera(with included screw hardware), but on this one it also inserts into the battery slot of the camera. It has a 19.5v DC output with a visual low battery warning LED and a 4-pin XLR DC input for hotswapping between external and on-board power. For another way to hotswap with this camera, a BP-U30 or BP-U35 battery pack fits inside of the battery cavity on the camera and again once the on-board pack dies, it will automatically pull power from the BP-U pack and you will see the battery indication on the viewfinder change. The FX9 plates are equipped with two powertaps and one USB to power additional accessories and three 1/4-20 threads on the top to attach accessories.

Now let’s talk what batteries to put onto all of these mounts by starting with our Nano Micro packs which are 98wh, 14.8v capable of handling up to a 10A load. They are UN tested and certified, passing UN38.3 certification, allowing them to be air travel compliant. The packs are equipped with an unregulated p-tap and a 5V, 3A USB port, and a 4-stage LED gauge to view remaining power. 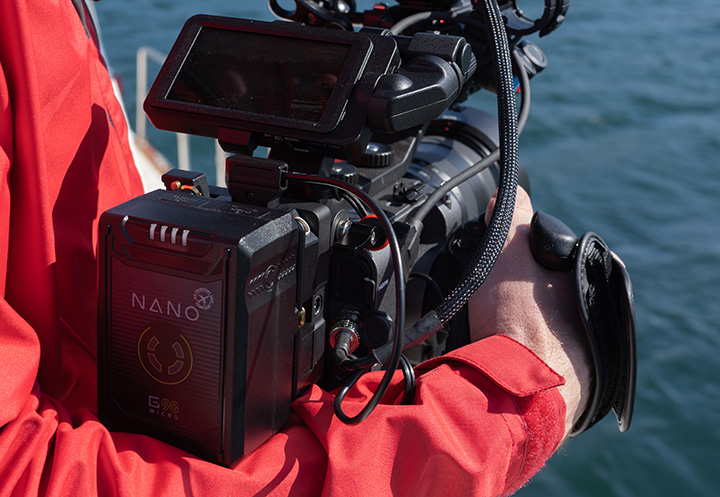 For a bit larger, more advanced pack, we have our Hypercore NEO series available in both 98wh (NEO 9 Mini and NEO Slim 98) and 147wh (NEO 150 Mini) capacities. The packs in the NEO series are capable of handling a 12A continuous load/16A peak and are outfitted with an intuitive multipurpose runtime LCD, RFID to view battery vitals via an app, p-tap, firmware upgradeable USB, 4-stage LED gauge, rubberized housing, and storage mode. 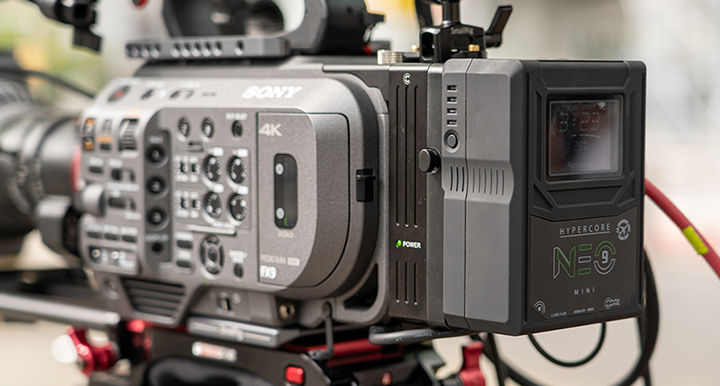 Although all of the brick batteries work great for all the plates, the form factor on the Nano Micro compliments the FX6 plate best, the NEO 9 Mini and NEO 150 Mini on the FX9, and the Neo Slim 98 for the FS7 plates.

If you are looking for an even higher capacity, we have our original Hypercore series featuring the Hypercore Prime which is a two part 190wh (95wh each half) and the 293wh Hypercore XL.

Lastly, an even more advanced battery option is the Helix series. This line encompasses all of the features of Hypercore NEO, but has dual voltage. The packs can function as standard voltage battery packs allowing them to seamlessly integrate into your current battery fleet, but when paired with a Helix mount plate, a user can access the high voltage to simultaneously output 14v/28v. This series comes in handy for the next camera we’re going to talk about, Sony Venice.

In the Helix system, we have a Helix mount plates for the Sony Venice which outputs standard voltage to the camera as that’s what the camera accepts but then outputs 24-34v for the two 3-pin Fischers on the top of the plate, providing 100% efficiency rather than using a standard 14v pack that has to boost voltage. These plates come in a v-mount to v-mount model (HLX-VEN-V) and a v-mount to gold mount model (HLX-VEN-G). Furthermore, we have a Helix power management control plate for the Sony Venice, providing a “hot swappable” platform between on-board and block battery/AC mains. There’s an on-board LCD to monitor input percentage/voltage of the power sources, as well as current draw of the whole setup. As with the other plate, these come in v-mount to v-mount (HLX-VEN-VP) and v-mount to gold mount (HLX-VEN-GP) as well. 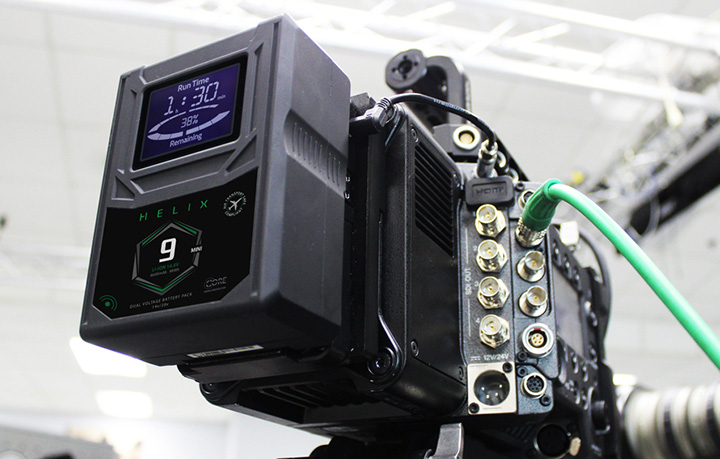 The brick style battery packs can also be used with the Sony a7 cameras mentioned earlier as long as they have the appropriate p-tap, PTC-A7SR.
Other cameras within the CineAlta or Broadcast lines are compatible with our brick battery offerings as well.

We hope this covered all the ground work for you to get your Sony camera’s powered up. If you have any additional questions, please feel free to contact us.