9G Films is a Texas based Production Company with a focus in the aviation industry. They first caught our eye on Instagram with their incredible BTS photos of their Core Driven RED DSMC2 filming fighter jets. Eager to learn more about what they do, we reached out to the founder of the company, Matthew Short. See below what the experience is like filming with the jets, any challenges they may overcome, and what they’re working on next. 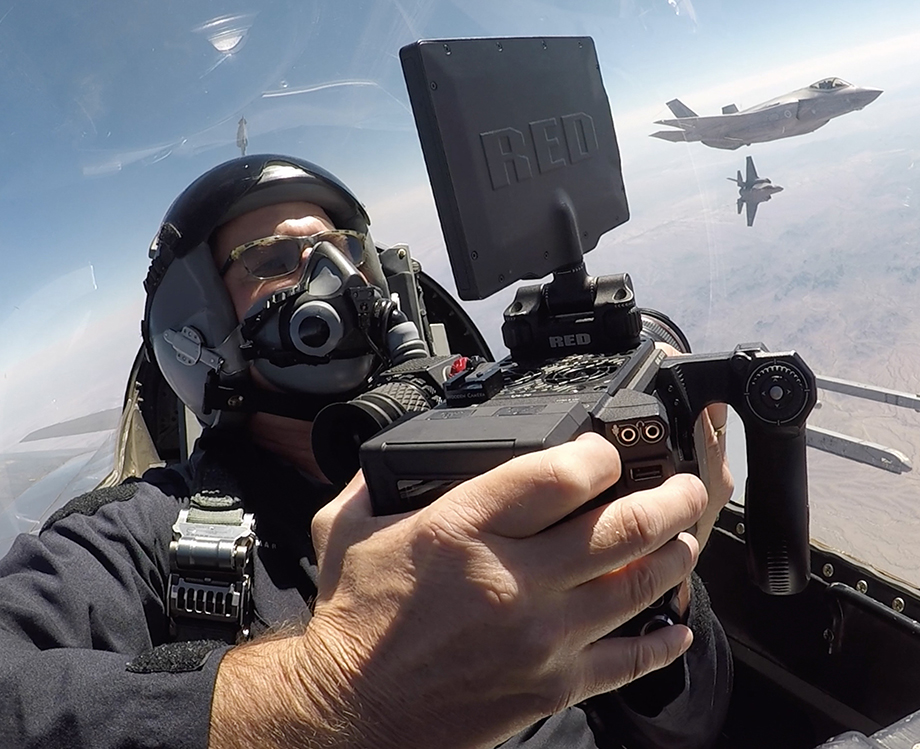 1. Tell us about yourself and your company, 9G Films.

I’m a director, cinematographer, and owner of 9G Films, based in Fort Worth, TX. We specialize in producing commercials, branded content, and corporate documentaries with a focus on the aviation industry. I cut my chops shooting aerials while working for a major defense contractor for 12 years where I had the opportunity to film/photograph flight tests of the F-16, F-22, and F-35. I have close to 1,000 hours filming in the F-16 and 1500+ hours in various other military aircraft including C-130J, C-17, KC-10, KC-135, UH-60, MK4, T-X, and T-50. I’ve had the opportunity to film with the Republic of Korea Air Force over South Korea. I’ve spent 2 months aboard the USS Eisenhower and the USS America filming aircraft carrier flight tests/qualifications of the F-35 for the IMAX movie Aircraft Carrier: Guardian of the Seas. I also spent a month on the HMS Queen Elizabeth filming F-35 carrier quals. Some of that footage was used in the BBC documentary, Britain’s Biggest Warship.

2. As an aerial cinematographer filming with jets such as a F35 or F16 is pretty unique. Can you explain what that experience is like?

It’s a rush like no other. The platform I primarily shoot from is the backseat of the F-16D. This is an aircraft capable of going mach2 and pulling 9Gz. Imagine riding the wildest rollercoaster you’ve ever been on, multiply that times 1,000, and oh by the way, it lasts for three hours. Flying in fighter jets is an experience that’s difficult to understand unless you’ve done it. The maneuverability, power, and speed of these aircraft is just mind-blowing. Understanding these capabilities makes coordinating an air-to-air shoot with military aircraft an exciting challenge. The possibility for capturing something no-one has ever seen is almost limitless. 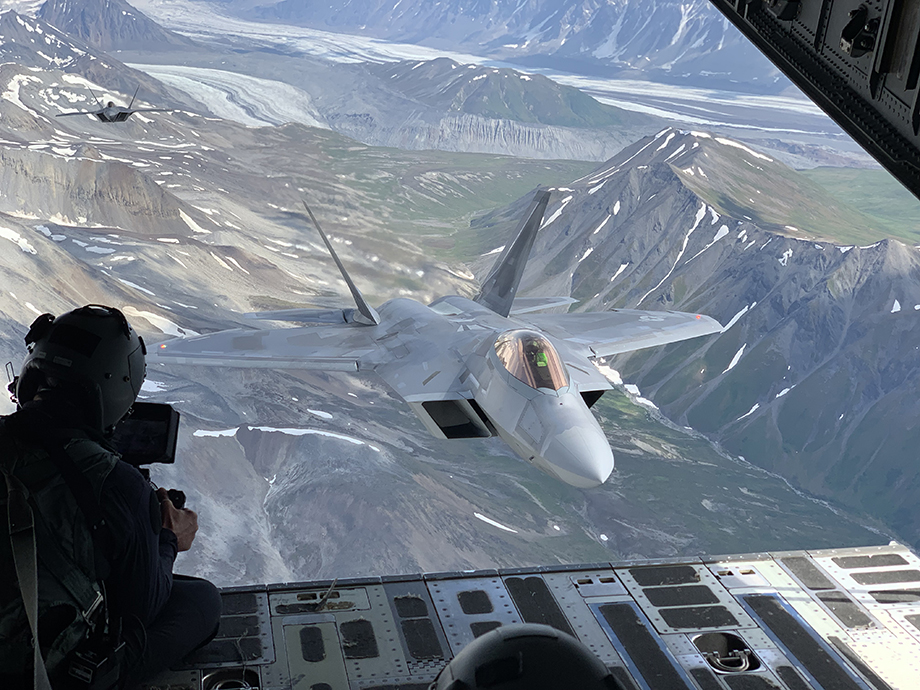 3. Do you come across any challenges while filming, and if so, how have you overcome them?

Turbulence and canopy glare are the two biggest obstacles. I recently had a shoot in Arizona for Luke AFB. We did a 15 ship formation flyover the city of Phoenix to honor healthcare workers fighting the COVID-19 pandemic. Flying at 1,000 feet in the Arizona heat (it was 105°) makes for some very turbulent air. Plus, maneuvering around this massive gaggle of planes, with the sun angle constantly changing made the reflections on my canopy a nightmare to deal with. For canopy glare, I’ve recently starting using a plastic black cone on my lens. I can put this right up against the canopy and it gives me a super clean image. There’s a US company that makes these but, I have the cheap Chinese knock-off. Mine is basically a collapsible dog bowl with a hole cut out of the bottom for the lens. I actually like it better because it’s rigid and I don’t have to hold it up or even think about it. To cope with turbulence, a heavier camera is better. I primarily shoot with the RED Epic-W Helium. This allows me to film in 8k so I can also pull 36MP stills. I shoot at high shutter speeds so I’m able to stabilize in post if needed without having to deal with any motion blur. The added benefit of filming with a fast shutter is the extra energy it gives to the footage. Unfortunately using any kind of stabilizer isn’t an option inside the cockpit. Even if a stabilizer could handle the Gz and unusual attitudes (read: “Because I was inverted”) I need to keep my camera as small as possible in case we have to eject.

I use the HyperCore HC9 on the Epic because I love the low profile and light weight of the battery. It gives me plenty of juice to last most flights. I always carry at least one spare and since the cockpit of fighter jets are so cramped, the size of these batteries are a real benefit. Not to mention, when I’m filming on the ground at an air base, on a carrier, or just at an air show I like to have everything I need for an all-day shoot in my backpack. Carrying four of these batteries around is a non-issue due to the size and weight. 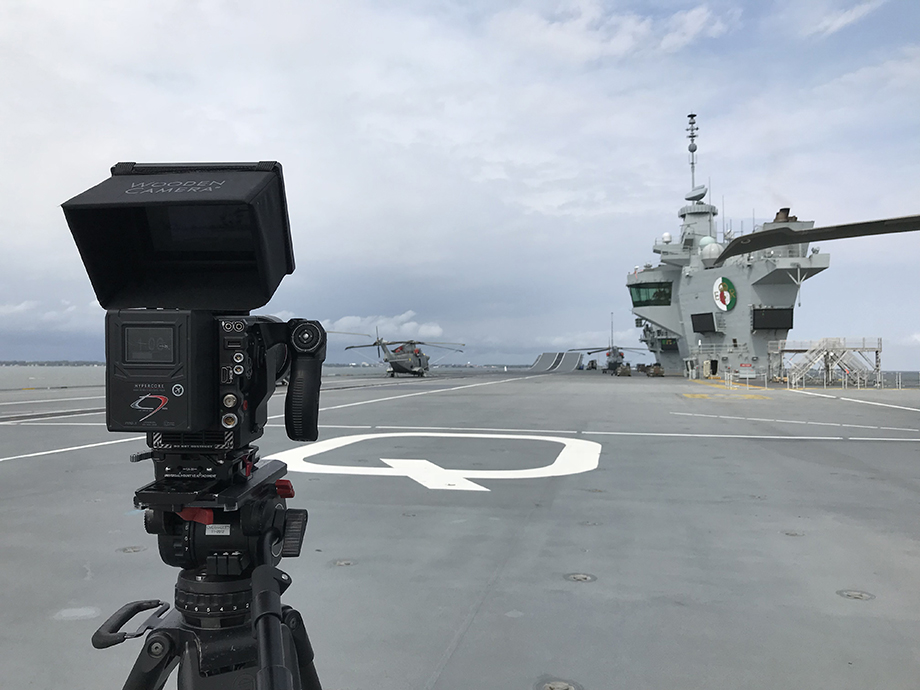 5. What can we look forward to seeing in the near future from 9G Films?

We’re in the process of adding a L-39 with a GSS gyro stabilized camera system to take our aerial filming capabilities to the next level. The Aero L-39 Albatros is a high-performance jet trainer developed in Czechoslovakia and is capable of 8Gz and speeds of 400kn. We’re also in development of an aviation-themed documentary series entitled, Vertical Tales. The first installment, Fat Tire Cowboys, can be found on our YouTube channel. Be sure to follow us on all the social channels @9GFilmsto see what we have coming up and to check out all the behind-the-scenes action.