Austin Ahlborg is an LA based DP who works on projects for many different companies from WD40 to Budlight, but in his free time, he gets a chance to work on his own passion projects which is what this client spotlight is all about. Austin, along with his his friend, Erik Butts, packed a ton of camera gear including 4 cameras, Hypercore Slim 98’s, tripods, etc., and headed to The Sawtooth Mountains in Idaho to capture the incredible Totality of the Solar Eclipse on August 21st. Below, he describes their experience on everything from researching and planning, to their stay in the mountains, filming the beautiful natural occurrence, and editing. 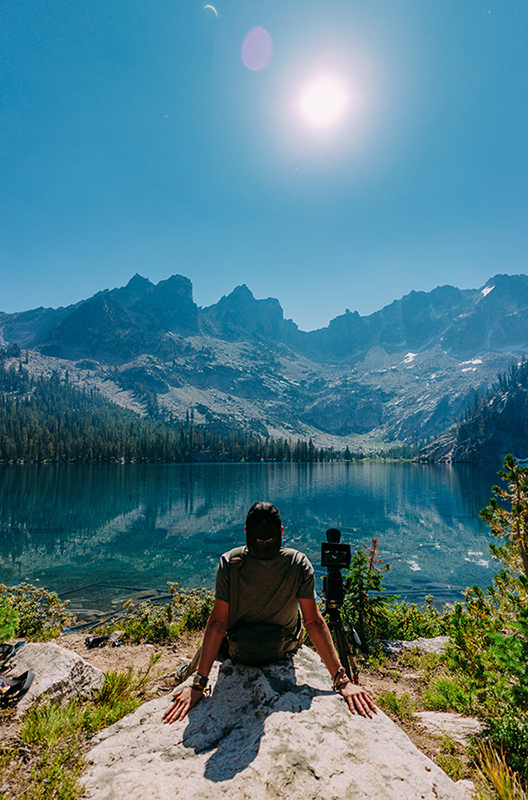 1. Tell us a little bit about yourself and what you do.

I’m a freelance camera operator and DP. I take artists’ or brands’ ideas and figure out how to portray them visually. It involves a lot of technical and creative thinking, which I really enjoy and the two seem to balance each other out. It starts with the creative side and coming up with a visual style on how you want to represent something then followed by the technical challenges of how you’re actually going to pull it off. Ultimately it comes down to decision making on what approach, what tools, what personnel, and how you’re going to manage it all to keep it dialed towards a unified vision. Sometimes you want a big crew with big tools or other times you want to be more flexible with a small skilled unit as in the case of capturing the eclipse.

When I’m not working on client based projects, I enjoy taking off and shooting something purely for myself to stay fresh and in tune with what I believe in. The 2017 Eclipse became that latest passion project where we headed up to the Sawtooth Mountains to immerse ourselves in the outdoors and capture the event. Drone World sponsored the project and handled a lot of the logistics while giving me and my partner, Erik Butts, full creative control to go create and have fun with it which I can’t thank them enough for their support.

From the start, we always knew the most important visual to capture was with our own eyes. In all the research I did online, most people said it wasn’t even worth shooting because a camera doesn’t do it justice compared to what it’s like to witness it in person. I read the best way to represent an eclipse was to see it with your own eyes and then paint it from the emotions you felt afterwards. That being said, for some reason we still thought it would be more fun to hike a bunch of heavy cameras into the mountains and set them up to roll while we took it in. We wanted a challenge mixed with pleasure, and that’s what made the experience complete and all the more fun. We could have just setup in town on a long lens like the rest of the tourists, but we wanted to push ourselves physically and technically to see how far we could go in solving this eclipse puzzle. How much will the exposure change and over what period of time? How do we move the camera over three hours? How do we modify the cable camera to tilt high enough to see the sun but not the cables? How do I cook this damn beef stroganoff MRE in the dark?

3. How did you decide where to go for the eclipse?

We wanted to be as remote as possible and fully immerse ourselves in a natural environment in order to best appreciate such an amazing natural phenomenon. We figured the crowds would be going to Jackson Hole and Oregon so we decided to slip in between to Idaho which everyone underrates, but is actually one of the best natural places for that reason. With the eclipse being at 11:30 am, we knew the sun would be high in the sky which meant our best chance of incorporating foreground would be with large subjects such as mountains. The Sawtooth Mountains became our backdrop and after scouring Google Maps along the path of totality, we came across a tiny little lake known as Upper Cramer Lake, which just so happened to have a river and ridge line perfectly aligned southeast. We essentially designed our shots right then on google maps while still in Los Angeles.

4. Did you come across any challenges and how did you overcome them?

The biggest challenge was definitely just the process of getting there. We needed to physically haul everything 8 miles into the mountains and live out there for a few days. It all came down to deciding weight versus value and what tools were necessary and what we could live without. Even stripped to the bare essentials, our packs were way over the weight capacity in order to carry basic camera and camping gear. This is where weight versus value had the biggest importance. You have to decide, would I rather have an extra battery for more shooting or less clothes and smell worse for a few days… We chose the batteries.

The other biggest challenge was mentally wrapping our heads around the eclipse and grasping how it all worked so we could anticipate shooting it. We were only going to get a two minute gap at the moon lining up perfectly with the sun so it took a tremendous amount of thought and research. The toughest shot to design was the cable cam shot done on an A7sII with Syrp Sling shot cable cam system. We ended up running the lines across a river for 52 feet over a period of 20 minutes while the sun changed from daylight to the night of totality. This wasn’t an easy exposure estimation and to get it smooth over time and synced with the movement of the sun took a full day or practice and troubleshooting.

In the end it was tough but it never for a second felt like work because we were having too much fun running around the woods and setting up cameras. When it came time for totality we sat back and enjoyed the show of what was one of the most beautiful things I’ve ever been privileged enough to witness.

The last challenge was Erik and I editing and processing time lapses in the back of an RV while driving home with an Imac strapped to the tabletop for 20 hrs straight in order to get a piece out in a timely manner. And that’s all I have to say about that. 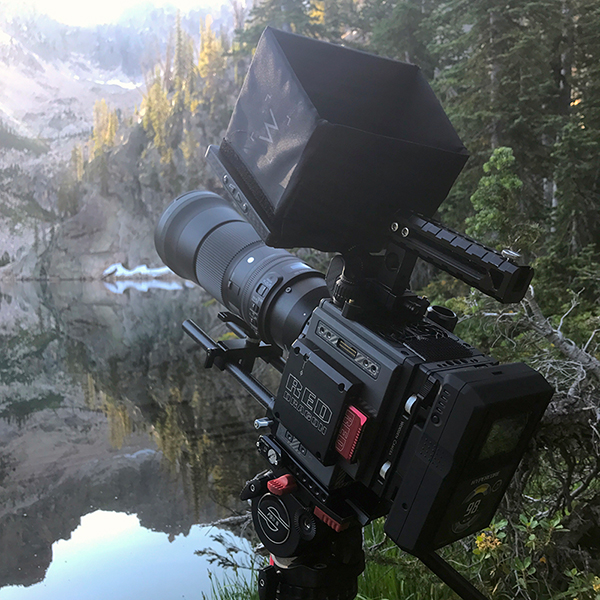 5. How did the Core SWX gear benefit your production?

This project was all about maximizing how much photography equipment we could carry while keeping it as light as possible, and the Core 98wh slims [Hypercore Slim 98] were the ideal power solution because they provided that right amount of size versus power capacity. Their shape is slim and very packable while being low weight and at full 98wh at 12 amps. Plus, the USB and P tap ports on the side give them a dual use which allowed us to adapt them to any other source such as a7s batts, cable cam motors, phones, controllers, lights, etc. Solar power wouldn’t have made sense because it would still require us to carry a heavy battery source to store it in and the recharge rate wouldn’t have been fast enough. We ended up with five of the 98wh slims and living off them for three days without ever charging. We had to be very particular with how we used our precious amount of power so we dedicated three batteries to power the RED camera for selective shooting and one battery to recharge our cable cam system and whatever other accessories. And the last battery was used for long night to day time-lapses powering a Sony A7s for multiple hours at a time.