REPUBLIC OF CHAD, AFRICA, JUNE 26, 2018 – As part of a continent-wide mission to restore wildlife and wild places, six black rhinoceroses were recently flown from South Africa to Zakouma National Park in Chad, where the threatened animal has not roamed in nearly five decades. The expedition was captured by Wildlife Cameramen Alexander Braczkowski and Steve Winter, supported by Core SWX, a leader in battery and charging solutions, for a forthcoming National Geographic documentary that will appear online.

The pair were also filming on behalf of the African Parks, a conservation NGO that has managed Zakouma National Park since 2010 on behalf of the Chadian Government. The organization, which currently manages 15 parks in nine countries, has undertaken similar reintroductions and translocations, most recently lions to Malawi, rhinos to Rwanda and 520 elephants to a new home in Malawi. This rhino reintroduction was particularly historic in expanding the rhinos range to an area once devastated by poaching, but in the last eight years has recovered. The organization relied on Braczkowski and Winter to document the recent rhino relocation. For ease of filming in the field – which requires fast response – and ability to travel, the pair turned to Core SWX’s Hypercore 9 (HC9) Mini batteries, which they used in conjunction with the RED EPIC-W Camera.

“These batteries are incredibly small, which provides us with an added practicality that is necessary for handheld filming styles,” explains Braczkowski. “I can’t tell you how helpful the Core Minis were in reducing the payload of our camera system while we were filming from the Jeep or jumping out to capture on the fly.”

This feature was especially useful during a day of shooting when the team encountered a herd of 15 elephants just a short distance from the vehicles. Though the animals typically appear in the area each day, to water themselves, the sheer number was more than expected – and the videographers knew they must capture the footage. 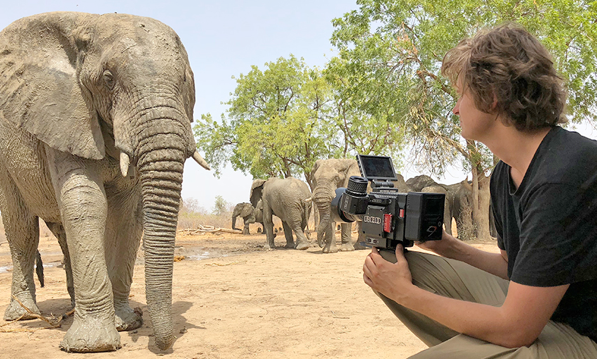 “Knowing that I could run those batteries for upwards of 70 minutes each, without major fluctuations was incredibly important,” continues Braczkowski. “Further, I knew that the battery wasn’t going to fail on me in the extremely hot weather, upwards of 113 degrees Fahrenheit, maybe more. This ruggedness is vital to a project of this nature, because this is once in a lifetime footage we’re collecting.”With travel becoming more and more difficult due to restrictions on battery sizes, the pair turned to the HC9 Mini battery for its travel compliancy. “We used Core products because of the ease of use and safety during our flight, as we are able to legally fly with them as part of our carry-on luggage,” says Braczkowski. “We needed to get to the field to set up and start shooting very quickly, so we took a chance on these batteries. We were so impressed with all its features that Steve [Winter] is already planning to use them for his next National Geographic project.”

At only 1.4 lbs. (861.8 g.) and 3.54 in. x 4.65 in. x 1.90 in. (.09 m. x .12 m. x .05 m.), the HC9 Mini is the perfect complement for mobile camera setups. The HC9 Mini’s battery cells are incased in an over-molded, rubberized housing, providing additional protection against accidental impacts that may occur when operating in rugged conditions. Its trio of options – the V-mount, RED-specific and Gold Mount, which is compatible with Anton/Bauer® chargers – make it ideal for any established videographer to incorporate into their existing kits.

The HC9 Mini is a 98wh (14.8v) battery with a 12A load. With the latest in Lithium Ion technology, the battery also comes with an LED backlit runtime LCD on the front of the battery pack that lets users know how much battery time is left when in use and indicates remaining charge time while connected to a charger. The RED-specific version can communicate directly with a RED camera’s LCD/VF.