Rich Dieckhoff is a New Jersey/New York based Cinematographer who produces high quality films for various difference brands as freelance work, as well as being a Video Producer and Global Video Manager for IBM Corporate. Through Instagram, we discovered his reliance on Hypercore battery packs to power his RED Scarlet, so we decided to reach out further to see more about who he is, what are his inspirations, his creative process and more.

I grew up loving movies but never thought I would find myself in a film career. In 2011 after my previous career in music started to come to an end, a buddy of mine that stopped playing music in 2007 found himself in film as a production coordinator, soon becoming a director and owning his own production company. He hired me as a PA for an Under Armor/Dicks Sporting Goods commercial that featured Michael Phelps and Miles Austin. After a long 26 hour shoot – I found a new path that was very intriguing to me, which was definitely not being a PA. I was so into the production environment that I wanted this to be my future.

I soon after picked up a Canon 70d to teach myself the basics behind film. After a few projects and feeling very limited I picked up a Blackmagic Cinema camera. The work then started coming in. After years of freelancing as a Camera Op being hired by clients like BMW USA and retailer Crate & Barrel, I wanted to challenge myself more and get into larger work. That’s when I picked up a RED Scarlet back in 2016.

Shortly after, I started to pick up more commercials and music videos which I DP’ed and Camera Operated on. In October 2016 I was recruited by IBM Corporate as a Video Producer and Global Video Manager for the company. I find a good balance with my workload between the corporation and my freelance work now, but certainly see myself going further in the future as I am very ambitious.

2. Were there certain cinematographers who inspired you to become one yourself?

Over the years and me getting more into films, Janusz Kaminski quickly set the new bar for my liking as I loved many movies he shot such as Saving Private Ryan, Catch Me If You Can, and of course Jurassic Park.

The Band of Brothers mini-series also stood out to me as an amazing production which was shot by Reno Adefarasin and Joel Ransom.

I always loved Star Wars growing up. It was very much my childhood so I would say Gilbert Taylor first set the bar for the franchise, but recently, Greig Fraser blew me away with the cinematography in Rogue One. To me, his style is exactly mine so I thought that movie was shot very beautifully. He also shot Zero Dark Thirty and did an amazing job on that as well.

Depending on the project my work flow changes. If I’m working with indie musicians, they usually have an idea of what they want but tend to not have any details. I get my visual concept by wrapping myself in the track to get a better understanding of the song and its meaning, writing down ideas as they come both for the story that’s being told and getting my shots set. I meet with the artist to review what we’re going to be shooting and locations. I do most of my camera strategy beforehand; planning my camera builds, lenses, composition, and movement for each scene. This includes me planning the equipment used for each shot; sticks, steadicam, gimbal, shoulder rig… etc. Sometimes shots don’t work out on location because of Mother Nature and or other location challenges, which is when I would come up with a new shot on the spot.

The same process goes to commercial work but most have storyboards already set and scripts for me to review beforehand.

4. If you had to pick one project as most memorable, which one would it be and why?

It’s really hard to say because each is so different that you make memories on each set. I have to say when I shot the BMW 2016 line up for their YouTube channel; I was originally hired as a camera operator but later became a DP for a few shoots. In that time I had the most learning on set being that the crew spend a lot of time together. There have been many great teams I’m proud that I have been a part of and I look forward to making many more memories in the future.

5. What Core SWX gear do you use, and how is it beneficial to your productions?

The Hot Swap Adapter was a game changer for me. Being able to continuously run and swap out batteries is huge!

The Slims are great for use on my DJI Ronin, and the 98s are just great powerful batteries. Having the USB port on them is also a bonus.

I also love the style of the Hypercores, very clean and the LCD screen makes keeping an eye on battery life very easy. 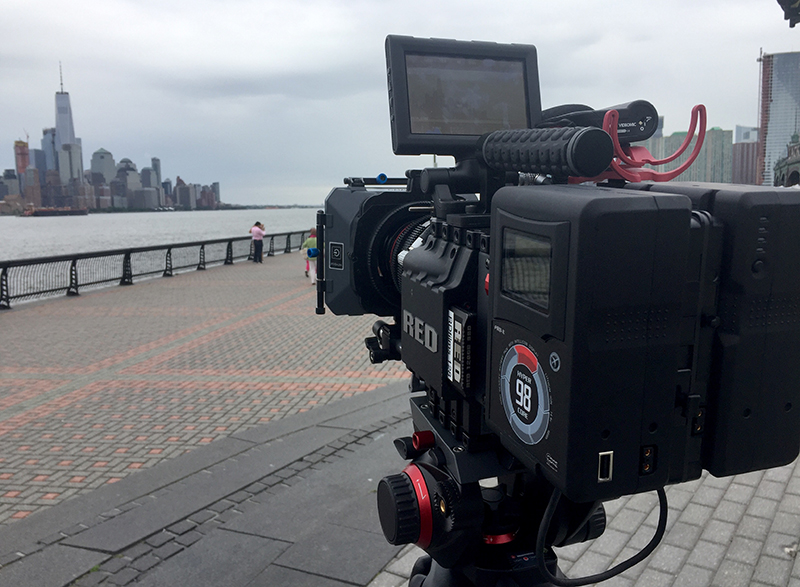 6. Aside from your achievements and accomplishments so far, do you have more you’re working towards for the future?

As film has completely taken over my life, I see me working my way into motion picture. I dream about it every day. Nothing happens overnight but hard work and dedication certainly shows in the long run.

I have so many ideas constantly running through my head that it keeps me motivated to achieve great things. 10 years ago, I never thought I would be where I am at today. I constantly get comments that people cannot believe that I did not go to school for this profession and that I’m self-taught. This makes me feel good that I am doing something on my own, being creative and willing to take risks to follow my passion while building my own life for me and my family.

The road in film is endless, let’s see where it goes.

Take a look at Rich Dieckhoff website, and his Instagram to stay in touch with what he’s up to.