Zacuto Rentals started in 2000 when Steve Weiss and Jens Bogehegn started to rent out their Panasonic Varicams. Since they only had 3 cameras that were high in demand, they had to cut back on their own production to focus on the rental company. Years later in 2005, Weiss and Bogehegn moved onto making accessories when Joe DeJulius came to Zacuto to work on a commercial they were producing and ended up staying there to take over the rental department. Fast forward, Zacuto has become a leader in the industry of renting and creating camera accessories for filmmakers, all the while Joe has been holding down the fort as Rental Manager/Director at Zacuto.

Recently, Ross Kanarek from Core SWX stopped by Zacuto.  “Zacuto and Core SWX go way back, almost 10 years.  When I stopped in a few weeks ago I had asked Joe how his rental battery stock was holding up.  I couldn’t believe that they had some BP06(2006) and BP07(2007) serials still in rotation.” he stated.  Back in 2006, Zacuto Rentals were seeking a better battery option for Rentals, and discovered Core SWX and never looked back since.  “Steve, Jens and Joe tested the battery packs, and then invested in them for Rentals, giving us an opportunity to prove we were on to something.” Ross explains.

DeJulius said, “The batteries were just as powerful as others on the market, cheaper, and lighter. Weight was important to us and Core SWX fit our demand perfectly.” Zacuto has been using the XP-LP90S and XP-L90A batteries since 2006.

When asked how Zacuto has kept them in service this long, Ross said “I asked Joe the same thing! Typically Li-Ion has a service life of up to 4 years. Joe said that they constantly make sure they are charged, in rotation, and limit hi-draw situations. We talked about hi-draw applications, and Zacuto is looking into bringing some Hypercore battery packs into the rotation to support that need.”

Zacuto uses Core SWX batteries to power all their 6” and up monitors and lights in their rental fleet. They use them for every rental with their Lite Panel 1×1 Bi-Color lights and sometimes to power an AJA KiPro Mini with the Zacuto Zwiss plate. They also use them as a system battery since they can power a wireless device as well as a monitor. DeJulius said he benefits from using Core SWX batteries because they are light, powerful, and get the job done without ever having a problem with them.

A typical day at Zacuto Rentals involves helping customers who walk into the store, taking orders over the phone and email, prepping gear, and checking gear back in. Although it gets crazy at times and they always get work done to the highest standards, he tries to keep it a laid back environment with music always playing.

In 5 years from now, DeJulius said it’s hard to see where Zacuto Rentals will be with how the market is always changing with so many different cameras coming out but he doesn’t worry about keeping up to date with the industry. He said, “I think we will be rocking and rolling like we always do.”  Asking Ross, “I foresee Zacuto Rentals onto their second round of battery packs, but who knows?  They’ve been running with these for almost 9 years, so we’ll have to wait and see.” 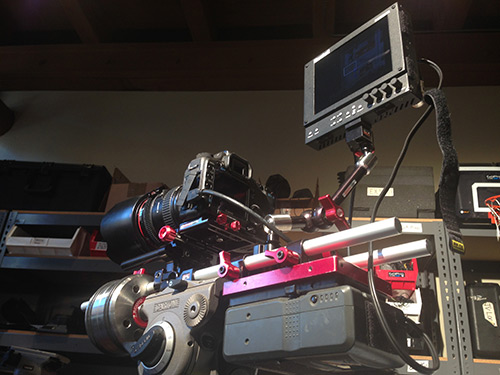 Stay connected with all the Zacuto products and insight they have to offer on their website.